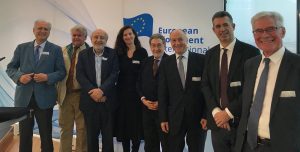 The Board of the European Movement International met in Vienna on 9 November, at the margins of the annual Federal Assembly.

The Political Committee ‘Europe in the World’ is working on a Policy position entitled “Strengthening the EU’s Position on the Global Stage”. The draft has received input by the PC members and it was discussed further by the PC at its meeting on 9 November.

Following that, the Board discussed current project, with the focus on the Women of Europe Awards and the upcoming Award ceremony on 28 November, where outstanding women from the worlds of political, business, activism and youth will be recognised for their contribution in advancing the European ideals.

The Board also discussed ‘On Our Watch’ and how the project, co-instigated with the European Youth Forum, will be utilised ahead of the EP elections to function as a tool for civil society organisations to monitor political parties’ manifestos and match them with their own manifestos, in an effort to scrutinise the parties commitment ahead of the elections and the EP work afterwards.

The Board then moved its attentions to Finances, with a discussion on the budget for the current year and that for 2019. ON Budget 2018, the EM International has seen an increase of about 200.000 euros in revenue, compared to what it was projected when the draft budget was adopted late last year. The increase has translated in additional activity. With regards to Budget 2019, the Board reviewed both the income and expenditure plans, which constituted a further growth in activity. It was agreed that the Board will recommend the draft Budget 2019 for adoption by the Federal Assembly.

With regards to membership issues, the Board discussed applications from 3 National Councils for a temporary reduction in their membership fee due to financial difficulties. The Board granded the requested reductions, which means a loss from voting right until all membership responsibilities are met. The Board also discussed the suspension of members that are inactive or defunct. On the other hand, the Board discussed efforts to revive National Councils that have not been operational and strengthen others that have been dormant due to lack of resources.

Two membership applications, from Raiffeisen Bank International and Aurubis were also discussed and the Board supported their accession to the EM International network as Corporate Supporting Members (without voting rights).

Lastly, the Board discussed the upcoming Federal Assembly, held later the same day, and reviewed the agenda and the key issues to be discussed with member organisations, namely the EP elections, the Work Plan for 2019 and the Budget for 2019.